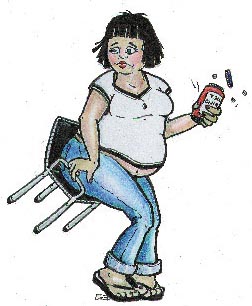 I recently received an email from a Naturopathic friend of mine who had recently returned from a conference and wanted to share with me an amazing story of another doctors personal experience with diet sodas and in particular aspartame.  The content of the email was so powerful that I had to share with you, and hope you will share with others.

In October of 2001, this doctor’s sister started getting very sick. She had stomach spasms and she was having a hard time getting around.  Walking was a major chore. It took everything she had just to get out of bed; she was in so much pain.

By March 2002, she had undergone several tissue and muscle biopsies and was on 24 various prescription medications.  The doctors could not determine what was wrong with her. She was in so much pain, and so sick. She just knew she was dying. She put her house, bank accounts, life insurance, etc., in her oldest daughter’s name, and made sure that her younger children were to be taken care of.

She also wanted her last hooray, so she planned a trip to Florida (basically in a wheelchair) for March 22nd.

On March 19 I called her to ask how her most recent tests went, and she said they didn’t find anything on the test, but they believe she had MS. I recalled an article a friend of mine e-mailed to me and I asked my sister if she drank diet soda? She told me that she did.  As a matter of fact, she was getting ready to crack one open that moment.

I told her not to open it, and to stop drinking the diet soda! I e-mailed her the article my friend, a lawyer, had sent. My sister called me within 32 hours after our phone conversation and told me she had stopped drinking the diet soda AND she could walk! The muscle spasms went away. She said she didn’t feel 100% but she sure felt a lot better. She told me she was going to her doctor with this article and would call me when she got home.

Well, she called me, and said her doctor was amazed! He is going to call all of his MS patients to find out if they consumed artificial sweeteners of any kind.  In a nutshell, she was being poisoned by the Aspartame in the diet soda…and literally dying a slow and miserable death.

When she got to Florida March 22, all she had to take was one pill, and that was a pill for the Aspartame poisoning! She is well on her way to a complete recovery. And she is walking! No wheelchair! This article saved her life.

If it says ‘SUGAR FREE’ on the label; DO NOT EVEN THINK ABOUT IT!

At the WORLD ENVIRONMENTAL CONFERENCE in the keynote address, it was announced that in the United States in 2001 there is an epidemic of multiple sclerosis and systemic lupus. It was difficult to determine exactly what toxin was causing this to be rampant. I stood up and said that I was there to lecture on exactly that subject.
I will explain why Aspartame is so dangerous: When the temperature of this sweetener exceeds 86 degrees F, the wood alcohol in ASPARTAME converts to formaldehyde and then to formic acid, which in turn causes metabolic acidosis. Formic acid is the poison found in the sting of fire ants. The methanol toxicity mimics, among other conditions, multiple sclerosis and systemic lupus. Many people were being diagnosed in error. Although multiple sclerosis is not a death sentence, Methanol toxicity is!

Systemic lupus has become almost as rampant as multiple sclerosis, especially with Diet Coke and Diet Pepsi drinkers.  The victim usually does not know that the Aspartame is the culprit. He or she continues its use; irritating the lupus to such a degree that it may become a life-threatening condition. We have seen patients with systemic lupus become asymptotic, once taken off diet sodas.

In cases of those diagnosed with Multiple Sclerosis, most of the symptoms disappear. We’ve seen many cases where vision loss returned and hearing loss improved markedly.

This also applies to cases of tinnitus and fibromyalgia.

During a lecture, I said, ‘If you are using ASPARTAME (NutraSweet, Equal, Spoonful, etc) and you suffer from fibromyalgia symptoms, spasms, shooting, pains, numbness in your legs, cramps, vertigo, dizziness,  headaches, tinnitus, joint pain, unexplainable depression, anxiety attacks, slurred speech, blurred vision, or memory loss you probably have ASPARTAME poisoning!’ People were jumping up during the lecture saying, ‘I have some of these symptoms. Is it reversible?’

Yes! Yes! Yes! STOP drinking diet sodas and be alert for Aspartame on food labels! Many products are fortified with it!  This is a serious problem. One of doctors speaking at the conference remarked that so many people seem to be symptomatic for MS and during his recent visit to a hospice; a nurse stated that six of her friends, who were heavy Diet Coke addicts, had all been diagnosed with MS. This is beyond coincidence!

Diet soda is NOT a diet product! It is a chemically altered, multiple SODIUM (salt) and ASPARTAME containing product that actually makes you crave carbohydrates.  It is far more likely to make you GAIN weight!

These products also contain formaldehyde, which stores in the fat cells, particularly in the hips and thighs.  Formaldehyde is an absolute toxin and is used primarily to preserve ’tissue specimens.’ Many products we use every day contain this chemical but we SHOULD NOT store it IN our body!

At one clinic it was stated that once free of the ‘diet products’ and with no significant increase in exercise; patients lost an average of 19 pounds over a trial period.

Aspartame is especially dangerous for diabetics. Some physicians, who believed that they had a patient with retinopathy, in fact, had symptoms caused by Aspartame.
The Aspartame drives your blood sugar out of control. Thus diabetics may suffer acute memory loss due to the fact that aspartic acid and phenylalanine are NEUROTOXIC when taken without the other amino acids necessary for a good balance.

Treating diabetes is all about BALANCE. Especially with diabetics, the Aspartame passes the blood/brain barrier and it then deteriorates the neurons of the brain; causing various levels of brain damage, seizures, depression, manic depression, panic attacks, uncontrollable anger and rage.

Consumption of Aspartame causes these same symptoms in non-diabetics as well.
Documentation and observation also reveal that thousands of children diagnosed with ADD and ADHD have had complete turnarounds in their behaviour when these chemicals have been removed from their diet. So called ‘behaviour modification prescription drugs’ (Ritalin and others) are no longer needed. Truth be told, they were never NEEDED in the first place!  Most of these children were being ‘poisoned’ on a daily basis with the very foods that were ‘better for them than sugar.’
It is also suspected that the Aspartame in thousands of pallets of diet Coke and diet Pepsi consumed by men and women fighting in the Gulf War, may be partially to blame for the well-known Gulf War Syndrome.

It may also cause birth defects, i.e. mental retardation, if taken at the time of conception and during early pregnancy.  Children are especially at risk for neurological disorders and should NEVER be given artificial sweeteners.  There are many different case histories to relate of children suffering grand mal seizures and other neurological disturbances talking about a plague of neurological diseases directly caused by the use of this deadly poison.’

Herein lies the problem: There were Congressional Hearings when Aspartame was included 100 different products and strong objection was made concerning its use. Since this initial hearing, there have been two subsequent hearings, and still nothing has been done. The drug and chemical lobbies have very deep pockets.

Sadly, MONSANTO’S patent on Aspartame has EXPIRED! There are now over 5,000 products on the market that contain this deadly chemical and there will be thousands more introduced.  Everybody wants a ‘piece of the Aspartame pie.’ I assure you that MONSANTO, the creator of Aspartame, knows how deadly it is.

This has been recently exposed in the New York Times. These [organizations] cannot criticize any additives or convey their link to MONSANTO because they take money from the food industry and are required to endorse their products.

Senator Howard Metzenbaum wrote and presented a bill that would require label warnings on products containing Aspartame, especially regarding pregnant women, children and infants.  The bill would also institute independent studies on the known dangers and the problems existing in the general population regarding seizures, changes in brain chemistry, neurological changes and behavioural symptoms.
The bill was killed.

It is known that the powerful drug and chemical lobbies are responsible for this, letting loose the hounds of disease and death on an unsuspecting and uninformed public. Well, you’re Informed now! YOU HAVE A RIGHT TO KNOW!